"…the schlock level was through the roof!" Tom Tytel (The Rex Hotel)

- Nov 8/20 - Hi friends, it's not news that live dates are off and future gigs, un-booked. CaMp CoMbO will slog away somehow, even though singin' and horn-playing are out. Apparently I let fly too many respiratory droplets!

- Killin' time because of a postponed recording date, the self-isolating but super-duper Alan Zemaitishas recorded some instrumental organ versions of Fred's songs. Some are recent compositions, and I've posted at Camp Combo's Bandcamp page. Cheers!

Say, do you book live music? Interested in a house concert or having a party? Reasonable rates!

The best way to hear, download or stream ALL our music is: Go to our Bandcamp page. Also find it at Spotify, iTunes and other streaming services. Head for the sky and find us on the Soundcloud, if that's your hang. - 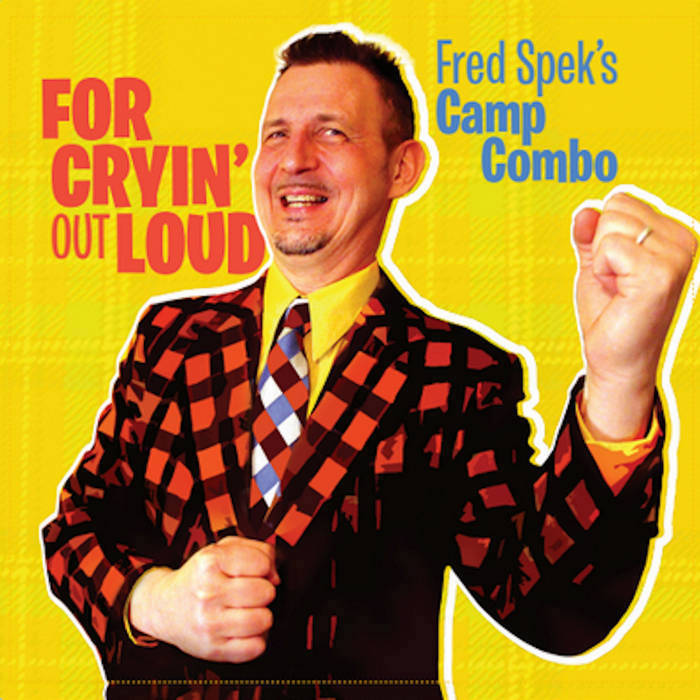 
Our latest CD (almost all originals!)is "For Cryin' Out Loud/I> " - Hear or download it at Bandcamp, or get at CD Baby 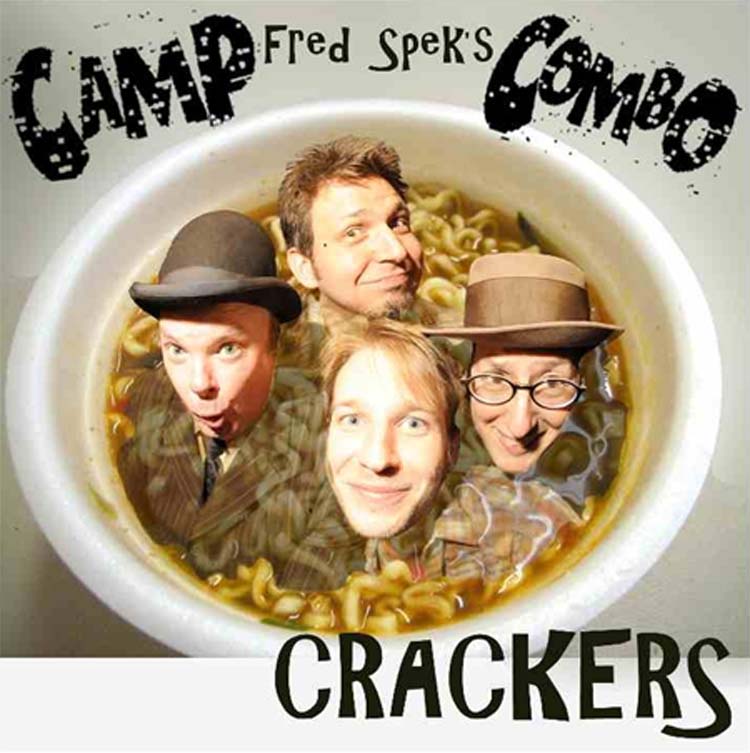 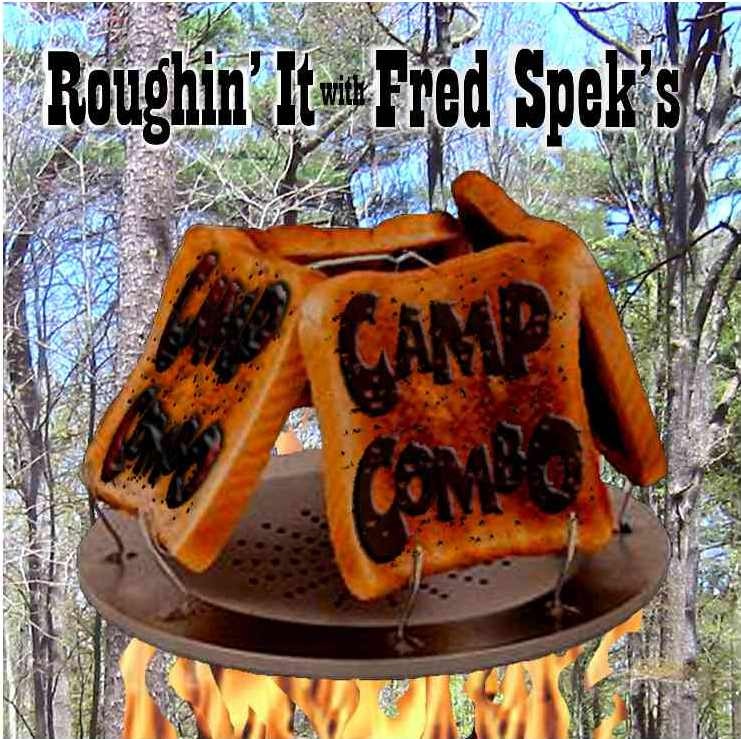 
This is a 5-song EP of original tunes by Fred Spek. 2 are instrumentals, Fred sings on the others! Send your email address and ask for free MP3s! 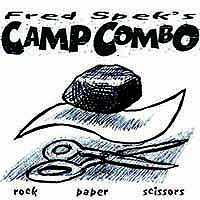 
Our friend Brian Cram adds trumpet and Treasa Levasseur, accordion. Glen Hall of Exclaim! liked it, you can read his review in Media Mentions below.

Get CDs (in Toronto) at Sonic Boom, Soundscapes on College St, Pandemonium (in The Junction...great vinyl there!).

Torontoist - Urban Planner (Nov 13/12 The Reservoir Lounge) - Every night there’s a seemingly infinite amount of forgettable indie bands playing in bars across the city. Tonight, why don’t you try something a little different? Fred Spek’s CaMp CoMbO promises a memorable evening, with their upbeat hybrid of pop, swing, jazz, and polka (lovingly known as “hipster vaudeville”). Don’t be surprised when a few TV theme songs and surf beats make their way onto the set list.

Canada's superlative music magazine ExCLAiM! reviews our EP "Rock, Paper, Scissors" :
By Glen Hall - After a long winter hibernating you may be thinking, "I need something to raise my spirits, something to give me an emotional spring cleaning." Look no further. Fred Spek and his cheerful bunch of summer music campers have got the antidote for anybody's case of the grumpies. With good-spirited humour and exuberant playing, Rock, Paper, Scissors takes a vaudevillian view of life and love. Delivered in a declamatory style reminiscent of Frank Zappa on Freak Out, Spek belts out lyrics like, "I'll never forget my blunder/Until you're six feet under" that will bring a wry smile to even the most sullen of listeners. The four-song EP keeps its rib-tickling focus throughout, including on the raucous reading of the 1895 pop tune "And the Band Played On." Camp Combo also provide food for thought, painting a vivid picture of God and Satan playing rock, paper, scissors to determine some hapless human's fate. This is a fun disc that's appropriate for pleasant social gatherings with friends and family.(Independent release)

Mysterious, ubiquitous music scenester Lonely Vagabond had this to blog:
"Fred Spek is a modern day Al Jolson-meets-Benny Goodman, part entertainer, part bandleader. The music is a bouncy carousel seamlessly blending jazz, swing, and ragtime. Offbeat characters capturing that sparkle of a Mardi Gras procession. A throwback, spattering of minstrelism and rousing musicianship, in the heart of Torontopia. A cuddly heart. With the spirit to match."

Stanley Fefferman of The Live Music Report when Gary Topp booked us as opening act for T.O.F.U., "...and you would love to dig the opening band, Fred Spek's Neo-Swing band Camp Combo playing tunes like the theme from "Secret Agent Man", and "Animal Crackers in My Soup".

And commuter rag DOSE gave us a plug:
"Great jazz doesn't always have to come from dark and tortured souls. Take Fred Spek's Camp Combo, for example. This quartet delivers goofy jazz and novelties. Just don't let any Billie Holiday fans know. There may be a riot, with jazz hands flying." - Christine Clarke

"Thanks to Fred Spek and his gang, even vegetarians should now take "Beans and Wieners" camping...this CD is so much fun, it puts the Kamp in camp." Jaymz Bee JAZZ FM

We opened for the very hilarious Wet Spots at Revival last Valentines Day, and some blogTO blogger said:
"The opening act, Fred Spek's Camp Combo, featured all of the elements essential for a novelty act: mad-paced, frenetic music that careened wildly between lounge and jazz, the all-important banjo and a singer sporting..." To read the rest, click here my friend.

In 2008, Fred Spek did an interview and solo performance for Centennial College's The Journal, a student magazine style cable show. His bit is the last piece, so scroll to the end once it downloads!

Here's a video of the song Takes Two to Tango, from a gig at Mitzi's Sister on Toronto's Queen Street W.

Jaymz Bee took his Jazz Safari to a gig at Parkdale's (now defunct) Mitzi's Sister, and had this to say:
"...we went to Mitzi's Sister to enjoy Camp Combo. It was quirky music that featured raspy sax solos and some daring vocals from Fred Spek. One Safari-ite observed; "These guys are much better musicians than they are letting on!" while another said "It's nice to see these young boys having so much fun, they're really odd!" It was a memorable and wacky way to end our first Jazz Safari of the season. Jaymz also hosts "Jazz In The City" on Toronto's JazzFM - Fridays 9pm-12 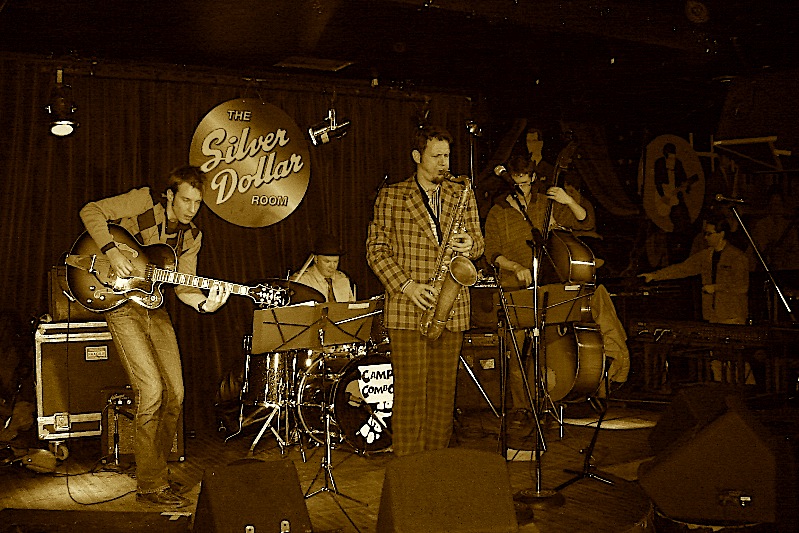 Nichol S. Robertson was born and raised. He plays banjo, guitar and other people's feelings. Currently Nichol runs his own bands The Honkytonk Boogaloo Boys, The Layrite Boys duo, and also enjoys selling his soul to such musical acts as Friendly Rich & The Lollipop People, with Ted Hawkins in Thelonious Hank, Victor Bateman's Another Country, Devin Cuddy, Whitney Smith, Ian Goodhue's rockin' soul revue The Mercenaries, Stones cover band Dead Flowers, CCR cover band Locomotion and is in demand by many others. In the future, he hopes to sell his soul to much more lucrative acts (i.e. Metallica, Lawrence Welk or the people who do the music for Saturday morning Christian channel shows).

Alan Zemaitis sits in the organist chair and plays the hell out of it! Alan is also with Chloe Watkinson's Park Eddy and is in demand by many others. He has his own groovin' trio too!

Tim Shia, is the unusual, usual man on the drum set, though we've done dates with Great Bob Scott, Mike "Rosie" Rosenthal and then some! See the long list below.

Great guitarists such as Eric St. Larent, Tom Juhas, Rizaldo Padilla, Margaret Stowe, Jason Crawford have also played with the band. Hot horns include trumpet blower Brian Cram, trombonists Scott Good and Steve Donald, alto saxist Toby Hughes as well as bari saxist Ben Burke who have all blown their horns with us, and whatta blast it was!

We'll play nightclub dates, house parties, swing dances, weddings in a variety of combos. We have a large repertoire with many jazz standards. E-mail:fredspekATgmail.com